Well overdo, but now is better than never.  My youngest daughter turned six months old on September 18, 2015.  Part of the reason for the delay in posting about her was driven by me wanting to have her exact physical stats from the doctor.  At our pediatrician’s office, a baby goes in for a “well visit” at one month, two months, four months, six months, nine months and one year.  Phew.  Seems like a lot.  It is.  The six month check up results in several rounds of shots.  They didn’t seem to phase my child.  Other than a slight frown in her otherwise smiling face, she moved on from the traumatic event pretty quickly.

Month six has brought on so many significant changes.  I totally forgot how different a five month old can be from a six month old.  We knew my youngest was bigger than my oldest daughter at six months, but we never would have guessed by how much.

At six months, my oldest had the following statistics.

Our “little” Morgan Riley is comparable in size to my husband’s statistics, while my youngest is following in my path.  It will be interesting to see how long it takes them to catch up with each other. 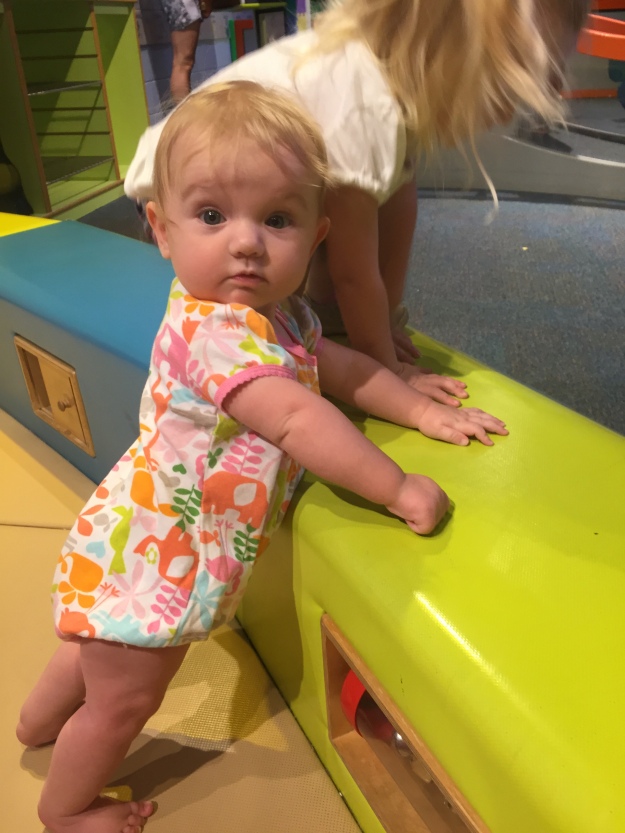 Aside from physically growing a lot, month six marked the first time that our youngest sat up unsupported by herself.  On a trip to Virginia she started sitting in the “tripod” stance – crossed legs with hands supporting her torso in front.  As she continued to practice this position, she started to sit with her arms straight out unsupported.  Absolutely no problem now. 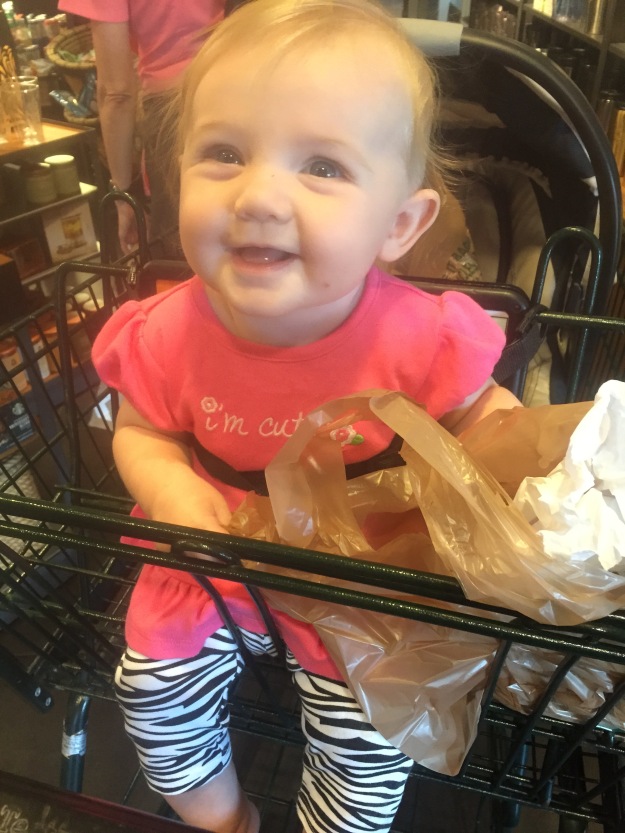 Being able to sit up unsupported brings on so many other big steps.  She can now sit in the grocery cart, without the carrier.  She can ride in the stroller facing out (no carrier means the jogger is WAY lighter).  She can sit in a high chair in a restaurant. She can sit in a toddler swing at the playground. So many fun and exciting things for her little world.

She loves crinkling crunchy paper, bags and toys.  She loves food – specifically, banana oatmeal, pears, mangos, peas and berries.  There aren’t many foods she doesn’t like, but please don’t give her prunes.  She absolutely loves her sister.  No one can make her laugh/smile as much as Madison.  She is a snuggler.  She loves to be cuddled.  She loves Doc McStuffins and Princess Sofia.  She is just so laid back.  She loves her papa.  She gets sweaty feet and would prefer to be inside.  At this point everything you give her goes in her mouth.  Beware. She makes me want to have another (really, not yet).  Time is going by so much quicker round two.  Sometimes I feel like a great mom, while other days, I’m not sure if I will ever get this role right.  That said, every time these kids smile so big you can see the happiness in their eyes (deep in their heart), I know we are doing something right.  I can’t wait to see what month seven brings.

“You have an excellent platform to, directly and indirectly, impact change in our community, and I’m excited to see your influence.” @iamkwainbryant ⁣ ⁣ As we celebrate Global Running today, I want to begin by reminding you that your platform is a reflection of your belief. Running has given me the gift of meeting people of all types in circumstances I may have never interacted through everyday interaction. I’m struggling right now. @brandonkgood said so eloquently, I am a kind empathetic soul. In the past week I have felt embarrassed and sad. Somewhere in my kindness I completely missed the war black friends have been fighting. (I’m not asking you to feel sorry for me, I’m being honest - now is the time to be honest).⁣ ⁣ Things are happening fast. It’s not sustainable. Neither is racism. In order to move forward in a sustainable, constructive and impactful way I have been reflecting, looking at myself and listening. Instead of absorbing myself in front of the TV and social media, I am hearing, reflecting and forming an opinion that will help me help my kids and family do better.⁣ This is my way right now. Please try not to judge. I vow to evolve. ⁣ White people. Let’s talk. Black people are tired of us relying on them to teach us. These are protests, not riots and parades. Talking about it is uncomfortable, but it will make you feel better. ⁣ ⁣ I love running. I am so happy we have a day to do it. But please don’t forget what is happening right now.
Start somewhere. I am embarrassed by how long it took me to realize how some of my black friends and co-workers must feel everyday. ⁣ ⁣ By not saying anything, I was saying everything.
❤️❤️ YR 3 @jmsd5678 ⁣ ⁣ Madison K Jazz/Ballet⁣ Morgan 4/5 Ballet and Acrobatics ⁣ ⁣ Thank you @masters_jami for welcoming our fam to your space. We can’t wait to be back. Mini recital at the 🏠 today.
Bulk of the classes on my schedule revolve around strength training for runners, walkers, riders. For my peeps who spend a significant portion of their exercise time moving forward in hip flexion, you need to practice moving laterally, rotationally, anti-rotationally. ⁣ ⁣ You need to build strength and mobility around the muscle groups that support your consistent movement in one plane. I love running and riding and refuse to allow myself to be another sucker for an overuse injury. ⁣ ⁣ So being at home has made that hard. Limited equipment. Sitting more. Walking less during the work day. The struggle is real. ⁣ ⁣ I’m itching to see y’all. And I have a few ideas. I will be launching two early morning workouts outdoors next week. And I’m talking early (5/6:30A early). I’ll bring a few pieces of equipment I know you all don’t have. If you are interested in joining, please reach out. This is not bootcamp, this is real training for runners and riders. Space is limited and expectation is that you want to learn how to protect your body and see an increase in performance. ⁣ ⁣ That said, Tuesday night we RUN. 6P track workout. Meet at AG Middle. We will hit the neighborhood and trails from there. Sign up through direct link in bio. Space is limited to 10. Cost is $10. ⁣ ⁣ Happy #fitfriday peeps - I encourage you to assess your why as you go back into a new exercise routine. Why grind the body? What is your purpose? Can you refine your purpose to feel your best? Eliminate the clutter.
Friends - giving back through movement has been something I hold near and dear to my heart. As we approach the end of the May Challenge (your challenge), we will donate over $1K to the @uwcentralcarolinas COVID-19 Relief Fund in connection with @fftcarolinas 💥 ⁣ ⁣ As I look forward to the next few months, I am excited to be partnering up with @robjohnson_fit in the @beers_and_burpees 11A Competitive wave. ⁣ ⁣ This event raises money for @dream_on_3 - an organization making sports dreams come true for kids with disabilities or life altering conditions. Last year, they raised over $150,000. It is year 10. A big one. ⁣ ⁣ Early bird pricing is open. I would love for you all to join me. Options for all fitness levels, non alcoholic drinkers and kids. PS why not use this as a reason to up your strength training game 🙌🏻
Running for me has been a journey. I started as a sprinter. Running with my dad around an asphalt track while he challenged me to 200m sprints.⁣ ⁣ I transitioned into a pole vaulter, running as fast as I possibly could for no more than 80 feet.⁣ ⁣ When I had kids, running evolved into my time. The time where I could move. No one asking me for something other than myself.⁣ ⁣ Whatever phase of life I am in, running has offered me a gift. The most accessible form of movement at this stage in my life. I have met my best friends. I have challenged myself. I have allowed my kids to see me take care of myself. Everyone’s journey is different and maybe it is just starting. ⁣ ⁣ Global Running Day is coming. As an initiative with @lululemon I will be running a 5K. This isn’t a race, it’s a day to celebrate the gift to move forward on our own two feet. ⁣It is also Free. ⁣ That same evening @bmister06 + @marathoning_mom and I will jump on a virtual zoom chat to discuss why we run with you. We invite you to move with us and engage with us. ⁣ ⁣ The last few weeks have been tough. In fact, I’m not sure where I would be if I wasn’t able to be outside on my feet through it all. ⁣ ⁣ Sign up link in bio. Date is June 3rd.